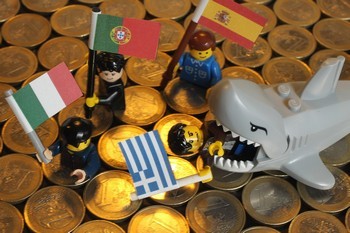 The Greek bride was sick and tired of being bossed around by the domineering northern Europeans and is considering going home to Mama Drachma. It’s true that she was not very good at keeping to her budget, but enough’s enough. Now the Italian marriage has fallen apart and the markets were able to do what the democratic process couldn’t – get rid of the Great Seducer. While the Italian bride has been better at keeping to her budget overall than Greece has, she is considerably weightier in debt terms. Saving Italy could bankrupt the entire European Union.

The events of this November show that the Eurozone crisis is due much more to deep-seated political problems in the European Union and in each of its member countries than to economic fundamentals. As last month’s article showed, the unfolding of the Greek crisis was clearly understood, predictable, and – from a Eurozone point of view – could have been resolved months earlier without endangering Eurozone stability (although for the Greeks, the pain of the reforms is another matter altogether). But focusing on the technocratic solution misses half the story. In the loose confederation of broadly democratic countries that makes up the European Union, sometimes the best technocratic solutions are simply not politically feasible.

Paul Krugman’s diagram attempts to show that in the Eurozone crisis there is no intersection between the set of politically feasible policy decisions on the one hand, and the set of technocratic solutions to the crisis on the other. No technocratic solution to the current European crisis would be acceptable politically. This is a reflection of the absence of legitimate Eurozone-wide institutions designed to deal with such a crisis – the lack of a Eurozone-wide decision-making apparatus that is not beholden for every decision to the parliaments of each of 17 member states; the lack of a fiscal coordination mechanism with teeth, able to impose a hard budget constraint on countries that are out of line; and the lack of a lender of last resort.

In the absence of these institutions, what is going to happen to Italy and the other European countries?

The Italian problem is not the Greek problem

The reason why the Italian crisis is so much more worrisome than Greece lies in the size of its economy (the third largest in Europe); in the size of its massive public debt (€1.9 trillion, or almost 120% of GDP); and in its dismal growth record over the past decade (only 0.2% per annum, against 2.1% for Germany and 1.7% for the Eurozone as a whole). We are not talking about a Greek problem in Italy. As Silvio Berlusconi pointed out in a letter sent on October 26 to the EU authorities before he was forced to resign as Prime Minister (and conveniently leaked to the Financial Times shortly after it was sent and before he resigned), Italy’s budget deficit in 2010 was 4.6% of GDP, closer to that of Germany (revised up from 3.3% to 4.3%) than that of France (7.1%), Spain (9.3%) or Greece (10.6%). But Italy’s budget deficit is not the real issue. The Italian economy has been stagnant for a decade and without growth, Italy can never reduce its massive debt mountain. That is the real issue.

Low growth in Italy results from a business environment that is rigid and over-regulated, and a large informal economy. In the World Bank/IFC’s 2012 country ranking of the ease of doing business in 183 countries 1 , Italy is ranked 87th in the world, behind Albania (82nd), Mongolia (86th) and Ghana (63rd), and practically all OECD countries except Greece. It is near the bottom in terms of paying taxes (134th) and enforcing contracts (158th), perhaps a reflection of a country whose longest serving Prime Minister since the Second World War, Silvio Berlusconi, is himself accused of tax evasion (amongst many other things), and who pushed a law through parliament to decriminalize accounting fraud. This combination of business unfriendliness and lax sanctions for illegal behavior has pushed a large portion of the economy underground. It is estimated that 21% of the Italian economy is not reflected in official statistics. Much of the economy is cash-based and it can be difficult to obtain a receipt in restaurants and shops. This is a country where, out of 41 million tax returns, only 394,000 tax payers (less than 1%) report incomes greater than €100,000. The average annual income declared by real estate agents to the tax authorities is €14,000, less than that of mechanics (€23,000 per year). Forgone taxes are estimated to represent losses of €250 billion per year for the Italian treasury, and their recovery would eliminate Italy’s debt mountain in less than 8 years. So while Silvio Berlusconi was enjoying himself with underage prostitutes at bunga-bunga parties in the Grazioli Palace in Rome, Italian taxpayers were having fun playing bunga-bunga with their tax system. But all good things must come to an end.

Weak economic growth like that in Italy makes it difficult or impossible for countries to reduce their debt, especially if a significant portion of the economy is underground. There are virtuous and a vicious cycles linking growth to budget deficits and to public debt. More growth leads to lower deficits and to a manageable public debt situation. Less growth means higher deficits and uncontrollable expansion of public debt. European growth has not been strong for decades but in recent times has been dismal. In the Eurozone it reached 1.2% on average since 2000, which translates into a per capita growth rate of just 0.6% per year. This per capita growth rate is similar to pre-industrial growth before the onset of the Industrial Revolution in the late 18th Century, though of course it reflects in part the huge decline in the economy due to the Great Recession of 2008 when practically all European countries had negative growth 2 .

But in Europe the story is even more complicated than that. Like cyclists in the Tour de France, European countries have split into three cohorts. The Maillot Jaune goes to the Germans and other northern Europeans like Estonia, Finland, Luxemburg and Netherlands, which since the depths of the crisis in April 2009 has sprinted ahead with healthy growth for nine straight quarters. In the tail waiting for the ambulance squad, are Greece, Spain, Italy and Portugal, whose economies have shrunk more or less continuously since the onset of the crisis. (The harsh reform programs imposed by the Troika on Greece and Portugal in exchange for bailouts are not without cause.) In-between we have countries like France, Belgium, and Austria.

The very different economic outcomes for the three groups reflect the inherent differences in competitiveness among the countries. The front-runner, Germany, spent an entire decade following the fall of the Berlin wall improving firms’ competitiveness, moderating labor costs, and streamlining its public sector. Today it stands at rank 19 in the World Bank/IFC Doing Business survey. Germans produce and sell goods that are cost competitive and that everyone wants to buy, many of which are produced in the country’s very efficient medium-sized regional enterprises. They are the Ants in Jean de La Fontaine’s “La Cigale et la Fourmi’ (The Grasshopper and the Ant). The Italians, Greeks and Portuguese on the other hand – the Grasshoppers – spent the Euro years expanding their public sectors and allowing wage increases in the economy that were not met by higher labor productivity, with the implicit blessing of the European Union itself in the form of easy money such as regional development programs and agricultural subsidies. These countries have now priced themselves out of the market and are no longer competitive.

The differing economic situation between the Ants and the Grasshoppers makes it difficult to come to a commonly agreed strategy in the Euro crisis, especially as under most scenarios it is the Ants who would have to bail out the Grasshoppers. This moreover is exacerbated by the differing speeds of recovery; what is urgent and critical in Athens and Rome does not seem so pressing when you get to Berlin. Ironic, isn’t it, that the cultural cradles of Europe (Greece and Italy), could bring down the entire Euro project.

The centrifugal tensions that are currently at play between the northern and southern Eurozone countries are not exceptional in times like these. In the United States there is today a very great tension between the recovering Eastern Seaboard on the one hand, and the stricken Rustbelt States like Michigan and Ohio, tensions that are playing out in the current Presidential election. But in the US there are democratic institutions that legitimize the tough trade-offs and hard decisions that need to be taken (even if in the current environment, the US politicians don’t seem to have the courage to take them). The Eurozone has no such institutions. Key decisions are being taken by national authorities in the interests of their own electors, not in the interests of Europe as a whole. Such decisions do not have European-wide legitimacy.

For instance, there is no doubt in anybody’s minds that in this crisis the decisions taken by Angela Merkel, the German Chancellor, have far greater weight than those of Herman von Rompuy, the President of the European Counsel, or even of Mario Draghi, the new President of the European Central Bank. She could authorize the ECB to issue Eurobonds; she could arrange a bailout for Greece. And yet Angela Merkel holds no Eurozone-wide authority. She is elected by German citizens alone and her tough decisions are legitimate in their eyes only. She acts only in their interests, as she should. What the Eurozone crisis has brought to light is a critical flaw in the design of the European project: on the European stage, the actors who possess legitimacy in the eyes of the entire region (e.g. President von Rompuy) have little or no real power, whereas those with true power (Angela Merkel, Nicolas Sarkozy, the European Commission) have no legitimacy across the entire federation.

This is the reason why Paul Krugman’s Eurovenn has no overlap between the set of politically feasible solutions and those that might actually work. The financial crisis brought out the mismatch between legitimacy and power within the European Union; but this defect would have surfaced one way or another in time. It is the worm in the apple – the fatal flaw in the Euro.

What does this mean for the future of Europe’s common currency?

Breaking up is hard to do

Europe is truly at a cross-roads and the Euro is unlikely to survive in its current form. There are three broad scenarios for the future of Europe’s monetary union:

But say there was a middle path? What if there was an amicable parting of the ways, the creation a two-speed system? The stronger northern countries would have their N-Euro, the weaker economies their S-Euro, with an administered exchange rate between the two (rather like the European Monetary System of managed exchange rates that preceded the introduction of the Euro). This hybrid is indeed possible, with the advantage of being an orderly unwinding of the current untenable situation, although not easy to implement. But it doesn’t strike at the heart of the Eurozone problem – the democratic deficit that prevents alignment of economic decision power with political legitimacy.

Make no mistake: the flaw in the design of the Euro is serious. Could it survive by politicians just “muddling through’? Perhaps this time. But if it is not dealt with, it will eventually surface again, to cause more heartache and suffering, until it has been resolved. Do Europe’s politicians have the will to make the Euro work? Time will tell. Currently, things are not looking good.

Bond James
Wormser Gérard masculin
The Future of the Euro