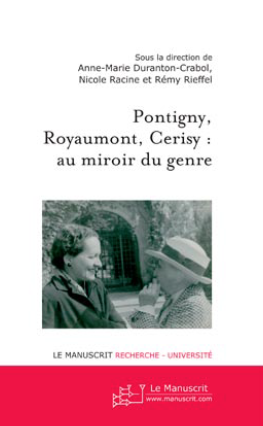 While Michelle Perrot and other historians introduced the gender perspective into the French historiography, this is hardly the case in the history of intellectuals. The pioneer in this area is the historian Nicole Racine, recently deceased author of numerous works on political history, with the collective Intellectuelles. Du genre en l’histoire des intellectuels that she published in 2004 with Michel Trebitsch and which covers the period from the Renaissance up to the present day. She also co-edited the proceedings of a conference which took place in late 2006; these proceedings will be discussed here.

This is about women’s participation in a cultural institution outside the norm, the Decades of Pontigny, continued in Royaumont and at Cerisy where they still take place. Their founder Paul Desjardins acquired at the beginning of the 20th century the Cistercian monastery in Pontigny situated in northern Burgundy and turned it, together with his wife, into a meeting place where writers and intellectuals met every summer to hold conferences on topics undertaken in the fields of culture, history, society or politics and to discuss them. Paul Desjardins was committed socially and culturally, but placed himself outside parties and religions. If we can however talk of an influence, it was that of a group of writers around André Gide, prominent in France especially during the interwar period.

In those days, it was not customary that Paul Desjardins, from the beginning, also invited women to participate, which displeased Gide. At the time of the first Decade, in 1910, he suggested to a friend to tactfully notify Desjardins :

« Couples are allowed, this means that the woman follows her husband : we do not invite single women. » (171)

According to Claire Paulhan, who comments on photos (the archives were requisitioned during the German Occupation by the Gestapo, the authors rely largely on memoirs, letters and personal diaries), the presence of women is well represented during this first period by the image of three wives sitting at a garden table where their embroidery work and their cameras can be seen. Apart from wives, another group of women consists of students of l’École normale supérieure of Sèvres, an elite university, where future teachers were trained and where Desjardins was a professor of literature. Like the other women, they attended conferences in silent awe, an attitude noticed by an American who in 1910 published in the United States a report of one of the first Decades to which she was invited (for certain foreigners and patrons exceptions are made). It notes :

« One of the biggest differences between France and the United States is that women in France, even the most intelligent among them, are quiet and listen when men are present. » (54)

However, a few women were already rebelling early enough, like Clara Malraux (born in 1897) who disagreed with her husband that Pontigny, « the place where the spirit was blowing, had to be, such as the Mount Athos, reserved for masculinity ». (99) Her feminism was nonetheless too militant in the eyes of the daughter of Desjardins, two years younger than Clara Malraux, who continued the work of her parents in 1952 at Cerisy, a castle in Normandy. Nicole Racine, who had already devoted a number of studies on Anne Heurgon-Desjardins, shows how the autodidact, who owes her culture to the Decades of Pontigny, reaches self-determination through a more discreet form of feminism, before her two daughters, after her death in 1978, for their part set off for the meeting place, helped by their husbands standing deliberately in the background.

Since the 1970s, women’s participation in the meetings of Cerisy corresponds largely to the global evolution of society. Both the percentage of listeners and that of speakers and of scientific officers of the Decades is constantly increasing. Clara Malraux in 1953 was one of the first women who co-lead a Decade. The feminization of certain academic disciplines also left its traces at Cerisy. Feminism and gender theory still need a long incubation period before gaining access to the themes that are dealt with.

The conclusion of Rémy Rieffel, media and intellectual historian forming part of the group of 15 academics, researchers and archives managers who are systematically exploring the history of Pontigny/Royaumont/Cerisy, is balanced. The Decades were not at the forefront of feminism in the 20th century, but a place where women could assert and strengthen their social identity as writers, artists and scholars. The concern of management and some regulars is, rather, whether Cerisy in the long term will be able to resist the bringing into line of institutions and remain a meeting place, independent of academic hierarchies and generational differences.

(Slightly modified translation of a report that first appeared in German in the online journal published by the Free University of Berlin querelles-net, 10th year, no. 1, 2009).