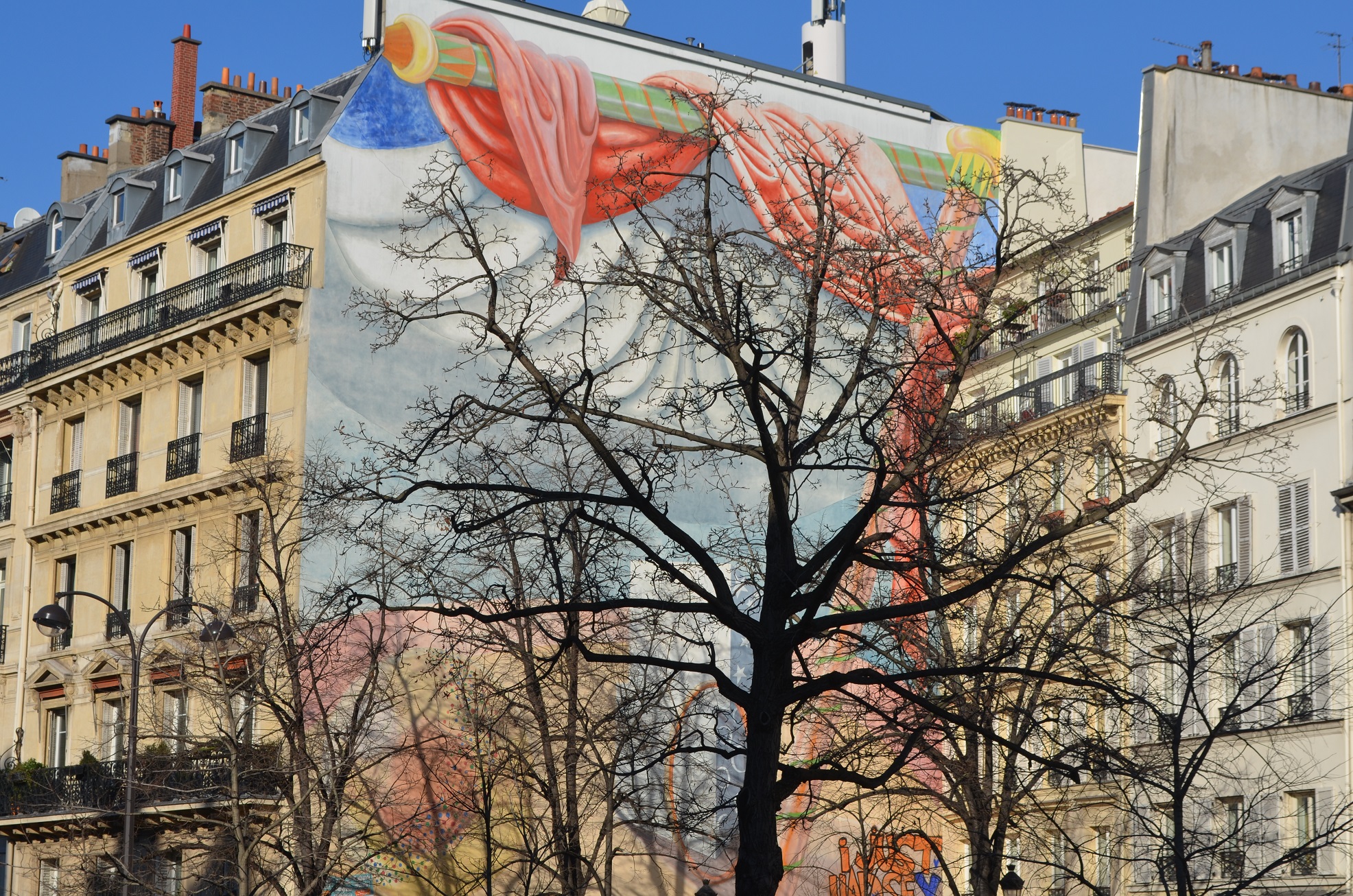 « We have set up games and parties that take place one after another throughout the year, special, wonderful and everyday fun-filled entertainment that drives away sorrow. The significance of the city generates all the resources of the earth and we enjoy the production of both the world and of our country. Ours is a city that is open to all. At the time of the action, we rely more on our own courage than on preparations and ruses of war ». Thucydides, The Peloponnesian War, II, 38-39

My father has not seen the tragedy that struck his city. He disappeared a week earlier, he took with him the fears of a child persecuted during the Nazi and collaborationist occupation, the pride of being the son of a great history of progress, freedom and tolerance, and the honour to believe that his generation, as Stéphane Hessel described it to me one evening (I had told him all over again), faced its challenges – the economic and political reconstruction of Europe, the overcoming of ideological and national differences and the decolonization. Accordingly, it allowed the future generations to carry out tasks. Is this optimism still in season ?

While preparing to host a Conference on the future of our climate, Paris has become the City of Martyrs resulting from a highly modern form of political violence, a co-ordinated ground attack by enemy commandos. This operation required the permeability between the international jihadist networks and the ground set for operation : this was a mission for the French agents 1 . If the suicide bombers of the Stade of France 2 had been able to persuade the guards to allow them to enter without a ticket, as they had tried to do, their suicide attack would have taken place during the television broadcast of the France-Germany match attended by the French President and the German Minister Steinmaier. The attacks in Paris are reprisals, a response to the ability of Western countries to undertake missions far from their homeland. The response by Daech seems to lie in the very area where we are fighting with them. The States involved in the international system attempt targeted strikes – Daech targets town centres, vulnerable places, if any. The impact of terrible acts affirms their power, motivates volunteers to join them and divides their opponents. On this front, their total victory in Paris augurs tragic consequences despite diplomatic adjustments that would be to the benefit of Bachar el-Assad.

The soldiers of Daech come from Europe, as the pilots of 11 September having taken pilot-training courses in the United States. What will be their next target ? To destroy a central infrastructure ? A train station, subway corridors, a museum ? The attackers would have attained their goal with the falling attendance at concert halls and public places, and with these attacks affecting our way of life. We become the Bataclan Generation after standing up for Charlie. Rising to this challenge also means contributing to a reflection on violence and proposing a way of « living together in harmony ».

Whether European or not, whether or not returning from Syria, some individuals may sacrifice themselves by assassinating in cold blood, dozens of other young people who came to party on a Friday night. The decision of self-sacrifice is influenced by motivation and such obscure commitments as the individuals. Nothing outside the individual experiences can explain this 3 . Their act is irrevocably an oath of violence leading to suicide. The mercenaries of the Bataclan carried out a military operation and the machine-gunners from the terraces attacked the freedom of an urban lifestyle. Their nihilism targets our society that has tolerance and free communication at its heart. André Glucksmann, the theorist of war who disappeared a few days before the event, had looked into this question : « He who is prepared to sacrifice himself considers himself worthy of sacrificing others. In this way, terrorism amounts to a sort of "mysticism", "an absolute self-possession", "a downward ecstasy", preaches Tchen in La Condition humaine, where Malraux echoes the words of Dostoïevski 4 . »

Their sacrifice results from destroying both the means and the ends. Essentializing their hatred or justifying it would still be a victory to them. René Girard, who also, very recently died, had expressed his failure to understand, in 2008. « The novelty as compared with the Western heroism involves imposing suffering and death, if necessary allowing oneself to undergo them. This "extreme rise" in violence stems from our world. I believe we are attached to life in a way that does not allow us to attain it. Terrorism is going beyond us, we feel like we can no longer think. It is a threat, which is apparent from the very fact that it is not understood. There is no negotiating 5 . » Girard remains Clausewitzian : political goals can be attained only by controlling the wave of violence that characterizes war. Suicide bombers who are forcing a merciless battle, including those who wanted it are expecting it to increase the tactical differences between the opponents of the Islamic State and to render them incapable of collaborative action.

In the face of the challenge gone out to all those who believe that the movement of people and ideas promotes peace, fundamentally opposed to any ideology of closing territories and withdrawing into oneself, let us create emergency laboratories for « living together in harmony » 6 .

How can we think that it is already the case ? I can think of a text. While laying out a « Moral » in 1947, Sartre objects to any fascination for an isolated act or the commando action. Some may imagine creating conditions for a radical salvation, an Apocalypse, but this idea remains abstract, it does not fit into a concrete context of a political conflict. Any sacrificial act cannot lead to a new era. About the Stern Group, he points out : « Terrorist. Nevertheless, it does not focus on human liberation like most terrorists but just Palestine and the neutralization of the Middle East. Certainly, other goals may follow, but at this point, violence is justified from a strictly defined business point of view. And probably also this company is moving towards human liberation. But liberation is defined because of certain set conditions. Accordingly, the only path for action justifies violence (against violence) 7 . » Exerting violence is justified by demonstrating that it is a response, counter-violence. This is what makes some accept to use blind instruments, and an organization that gains from this sacrifice of its members demonstrates its determination.

However, this extreme violence creates or justifies a set of standards making it a world order and not just a means of pressure : « I can set the destruction as a means to an end above its purpose. In the latter case, I affirm the insignificance of everything that exists in relation to me, and my goal. Violence implies nihilism. […] As with any activity involving the same time value, violence has its own justification, this means that by its very existence, it claims the right to being […] Thus violence is Manichean. It believes in a world order, but manipulated by ill-will […] You just need to destroy the obstruction for the order to appear 8 … » According to Sartre, perpetrating extreme violence means compromising the end that we pursue by viewing it as an absolute that we must attain at all costs. The dilemma of the historical moral is that the means are not appropriate for moving towards attaining the very end. The course of pursuing the ends in history involves accepting failure (temporary), and not making violence absolute. This will be central to his writing up to the Critique de la raison dialectique.

One further aspect of Sartre’s thoughts that is essential should be mentioned. It concerns the multi-dimensionality of the event, which « goes through thousand consciousnesses at a time 9 . » It goes beyond climactic acts. The full meaning of the event is outside of its authors’ control. « The way to experience the event is part of the event itself. The public outrage under a decree falls under the event of the decree. […] Precisely because this active meaning is multidimensional, the event means imbalance, and it is a decentred proliferation. […] In its external nature, the event is a thousand times separated from itself as the actual interpretations are part of the event, making up the event and each one is external to the other.[…] The innumerable cracks in the event are unsettled, it is impossible to put them together in any place 10 . » An event always surprises its audience. It will be internalized by each of them, turning into a course of personal action before becoming historic. So it is with the Bataclan : before rejoining the « collective memory 11  » which will eliminate the key aspects, the event obliges everyone to take a stance and to get involved actively. The separation of the consciousness that breaks up the event also encourages everyone to attempt reaching out to others, which will then transform the experience into a historical fact.

If this is true, the historical dialectic of the Bataclan Generation begins with the immediate reactions from those who had to deal with the shock without any mediation. Reactions of witnesses and direct victims were released. I would like to look at the staff members at Paris hospitals, who were on the front lines, without any hindsight. Bruno Riou, Dean of the Faculty of Medicine, states : « We stood together in horrendous conditions. It was nonetheless an altogether unusual situation, with wounds of war. Ten to twelve operating room staff worked side by side. And we could attend to the fifty people injured we treated. One must say that the solidarity was incredible. Interns, department heads, surgeons came to help us. I am very proud of this mobilization 12 . »

The immediate transition from shock to action fosters resilience : despite the shock that divides and creates a serious disconnect, the human solidarity is preserved, the feeling of goodwill came to the rescue of our troubled minds. The solidarity is subsequently developing worldwide, through social networks and gatherings combined. Let us rely on it to oppose the intelligence that is associated with barbarity. Sens public was created in 2002 in response to the significant change in the political landscape in France, which created a shock wave that was emotionally powerful. The example of generations that have overcome antagonisms and massacres of the twentieth century by their mobilization will be able to inspire us. Beyond the war against Daech and the hope for a possible way out of the Arab political confinement, an education policy and dialogue remains open. Jean-François Bayart finds in these attacks the « boomerang effect » of a misguided policy ever since the first oil crisis in 1973 13 . Dreaming of a public opinion that is magically in solidarity with the oppressed Arab populations and voting to support the suburban young Muslims seems to be a pious hope. That does not prevent supporting democratic actions everywhere, or fostering the « Republican pathway » in our country. This is indeed the challenge of living together. The Bataclan Generation will prepare the path to take it over. By creating these laboratories for living together, alongside other initiatives to be implemented for summing up the event, we are hoping to set this generation to live up to its own event.