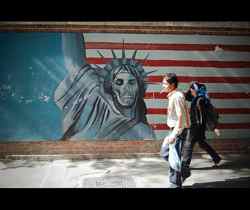 It has been almost a month since Iran’s much debated June 2009 elections. What seemed to start off as a "green wave" of many enthusiastic, happy, and hopeful participating Iranian citizens soon became every human rights advocate’s worst night mare. Dozens innocently killed, hundreds beaten and injured while thousands are still missing and imprisoned as a result of their peaceful dissent.

I don’t support Mousavi and I don’t believe in participating in a non-democratic electoral process. The candidates for the Iranian presidential race are not chosen by the people but rather by the Guardian Council. Four years ago many Iranians felt the way I do and abandoned the voting polls, resulting in Ahmadinejad’s entrance in to presidency with only a minority vote. Four years later after witnessing unprecedented inflation, rationed gasoline, and the notorious remarks of a president who constantly misrepresented the Iranian population among the international community, Iranians decided to take action in hopes of creating change within the very limited parameters of the Islamic Republic regime.

Their attempt? Choosing bad, over worst. Mousavi was going to be their choice of bad between bad and worst yet they still did not have a chance to even choose the bad. Maybe if I hadn’t left Iran at the age of thirteen and had to continue living in a country where my dignity as a young woman and human being was compromised every day, I too would have considered participating in the so called "elections" in hopes of having bad over worst. Instead I have the luxury of sitting in my apartment thousands of miles away where I can form my own opinions and make my own choices while expecting to be respected and heard. A luxury that most girls I went to elementary and middle school with in Iran never came to know.

It’s true that human rights should be upheld everywhere for all people, but how often do we realize that some of us are among a very few who actually have the opportunity to practice those rights. In fact, I think about being a woman outside of Iran all the time. Because if I were still there right now the value of my very life and being would be equal to half the value of a man and I mean that in a literal sense. Today in Iran, in a court of law, the testimony of a woman is equal to half of a man. In other words it takes two women to make a valid testimony that would actually count.

What I’m trying to say is that as an Iranian American young woman, for me being outside of Iran is a privilege that I will never take for granted. I will continue to be active and fight for the freedom, health and happiness my people so deserve.

When I, among millions of other Iranian youth was born in to this revolution, we were not given a choice. When I entered first grade as a six-year-old, we were shoved into a class room where we had to chant "death to America" every morning not knowing why we were made to do any of those things. Why we had to be covered from head to toe, why we couldn’t listen to music or own and play an instrument, why we couldn’t play or attend sports events, why our very existence as young girls was simply not allowed.

We have brilliant, incredible students and young people in Iran, eager to communicate and move forward with the rest of the world. They have already relayed that to us through their incredible efforts in using facebook, twitter, YouTube and many other social networking mechanisms to reach out to us. They depend on us to make sure their voice is heard.

I ask particularly of the youth around the world to hear the cry of the Iranian youth for freedom and to use the privilege of exercising our freedom of speech and expression to promote theirs. I urge you to please connect with United for Iran project to show your support and solidarity on July 25th "Global Day of Action for Iran".

After the controversial re-election of Iranian President Ahmadinejad, Sens public asked Pantea Beigi to contribute with her point of view about the Iranian present situation. As a young Iranian woman living in the US, she actually works for the The PeaceJam Foundation based in Denver, Colorado. She is particularly concerned with the fate of younger generation.