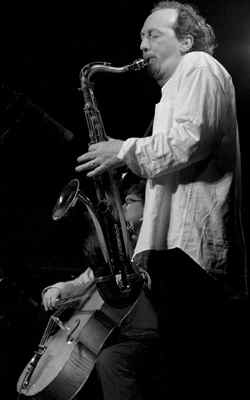 Carole Dely  – Can you tell us how you decided to become a musician ? Was it an obvious choice to dedicate yourself to jazz?

Ellery Eskelin  – My Mother was the inspiration towards my path to music. She learned to play music in the Pentecostal church and later played the Hammond B3 organ professionally in Baltimore in the early 1960’s. I learned music from listening to her. She also had some jazz records by Dizzy Gillespie and Sarah Vaughan I also was inspired by the sounds of the great R & B saxophonists from the ’50s. Once I started playing the saxophone (at age 10 in 1969) there was never any question about jazz. It was already my favorite music. I hated rock and roll as a child.

C.D.  – What style of jazz did you learn and work on before playing your own music? Charlie Parker said about be-bop, “learn the changes and then forget them’. Do you agree with this, is this how you work?

E.E.  – I played standards and blues at first. Then I became interested in more "outside" (or avant garde) type playing. Eventually I went back and learned more about be-bop, learning how to better play changes in a more melodic fashion. And yes, I agree with Parker’s statement. I find that once I have learned how the music works I am freer to express myself with it.

C.D.  – In 1994 you formed a trio with keyboardist, accordionist Andrea Parkins, and the drummer percussionist Jim Black. You have recorded many albums for “Hat Hut’. On the album One Great Night (2009) the tempo seems to slip away as in the Italian term rubato. The outbursts of the saxophone are punctuated by repeated patterns of the drums and keyboard and we can hear many rhythmic contrasts. How do the three of you work together to create this music? What do the scores look like?

E.E.  – The music is a type of organized improvisation. We negotiate between the composed elements and the improvised elements in as many different ways as I can think of. The scores are deceptively simple visually but the music required a lot of training and work.

C.D.  – You have played several times with string instruments, I was thinking of As Soon As Possible the album with Vincent Courtois (cello) and Sylvie Couroisier (piano), also the album Vanishing Point with Mat Maneri (viola) and Erik Friedlander (cello). In both these albums you and the other musicians ‘play’ with the different aspects of the tone, the layers of sound, the accents and silences. Does playing with string instruments lead you to play in a particular way, is this what you are looking for?

C.D.  – You have recorded with the saxophonist Dave Liebman Different But The Same (2004) and Renewal (2007), how did this musical encounter come about? Would you say Dave Liebman’s playing and conception of jazz is close to yours? Was it inspiring to work with him ?

E.E.  – At first, many listeners do not see the connection between David and me. But when they hear the band this connection becomes clearer. When I was in my early 20’s I studied with David and aspired to the type of jazz playing that he does. But after some years developing my own music I found myself in a much different musical area having more to do with group improvisation. But I still share certain jazz roots and inspirations with David so it is nice to be able to perform together with him. He has a great deal of experience the jazz world.

E.E.  – I don’t think there is any particular music which is a direct model for what I do. I take my inspiration from various, sometimes unrelated sources and combine them in my own personal expression.

C.D.  – Do you play another instrument other than the tenor? To my knowledge, publicly you only play the tenor.

E.E.  – I began on the tenor and over the years I have played all of the saxophones plus clarinet and flute. But I made the decision in the late 80’s to play only the tenor. I like the idea of making a complete sound and musical expression with one instrument.

C.D.  – Finally, what does music mean to you, and what has it brought into your life ?

E.E.  – For me it is difficult to separate the idea of music and life. Music has been an important part of my life since my earliest memories.

Born in 1959 in the States, the composer and tenor saxophonist Ellery Eskelin settled in New York in the early 80's. Gifted with expressiveness and resourcefulness like no-one else, his lyrical and eruptive style has made him an important figure on the world jazz scene. He has recorded dozens of albums with different formations, and regularly tours Europe. How did he become a musician? how does he work and conceive jazz? How does he create his music in collaboration with the other musicians? In this interview with Carole Dely for Sens Public, Ellery Eskelin give us some answers.