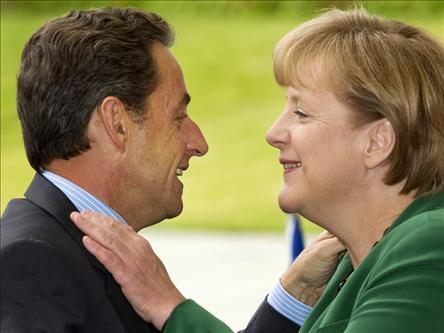 You’ve got to pity the Germans; no-one ever seems to feel sorry for them. After all, the reintegration of East Germany after the collapse of the Berlin Wall twenty-two years ago cost the country €1.3 trillion. Uniquely in Europe, Germany then spent a decade diligently and laboriously working on increasing its labor productivity and reducing labor costs, reforming public finances, and getting its financial house in order, unlike many of the other Eurozone countries that splurged on pay raises for civil servants and white elephant public construction projects. It now has the healthiest economy in Europe after the Netherlands and a massive trade and budget surplus. So why is everyone now expecting that Germany bail out the peripheral Eurozone countries that were so profligate over the same period? It just doesn’t seem fair.

This at least, is the current Weltbild from Berlin and Frankfurt, and it is clearly reflected in the measures contained in the new 26 country EU treaty announced by the Merkozy team on December 9. 1 Germany sees the Eurozone crisis as a debt problem uniquely anchored in the fiscal irresponsibility of politicians in other countries of the monetary federation, and it contrasts its own growth and healthy trade surplus with the stagnation and trade deficits in the other countries. Now that the chips are down, Germans just don’t think it’s fair that their country would be expected to pay for resolving the crisis. They believe that Greece, Italy, Ireland, Portugal and Spain need a good dose of fiscal austerity; they need to roll up their sleeves and become competitive, just the way Germany did ten years ago. The new treaty is a compact to enshrine responsible fiscal management in Europe. 2

To my mind, the German view of the financial crisis is deeply flawed, and the harsh medicine that Germany and France think will purge the wrongdoers of their sins is likely to kill the patients before it cures them. Indeed, it is likely to bring the entire Euro structure tumbling to ruin.

This is not to say that the troubled Eurozone peripheral countries – Portugal, Ireland, Italy, Greece and Spain (the PIIGS) – are blameless. Greece in particular racked up unsustainable public debt and a persistent budget deficit and has had to engage in debt restructuring with its lenders because it’s simply not able to service its debt mountain. 3 Ireland and Spain allowed housing bubbles to develop that significantly weakened these countries’ financial sectors when private borrowers were unable to pay their mortgages, and their banks eventually had to be bailed out. Italy has an over-regulated economy, one that is rigid, uncompetitive and unfriendly to business, which has held back economic growth and the country’s ability to service its huge debt. Portugal is a less exuberant Greece, with public spending projects and a social safety-net that the country simply can’t afford. All of these countries were negligent, for unlike Germany, it’s true they did not invest in productivity improvements, they did not improve competitiveness, and they did not clean up their public finances. But nevertheless it’s difficult not to feel that countries like Spain, whose debt to GDP ratio has been similar to that of Germany, are getting a raw deal.

Nonetheless, the crisis is much more complex than the simplistic view from across the Rhine. It is more like a set of Russian Matryoshka dolls, those intricately painted and lacquered wooden figurines nested one inside the other. The largest, most visible doll is the debt crisis. It towers over us, and is in some ways a self-fulfilling prophecy. As we saw with both Greece and Italy, when financial markets lose confidence in countries’ abilities to service their debt, interest rates rise and these countries become less and less able to repay their loans because of the increase in debt service payments, fulfilling the market’s pessimistic view. And the debt mountain grows when governments spend more than the revenue they bring in through taxes, and thus incur a budget deficit.

So the second Matryoshka doll is the crisis in public finances that now prevails across practically all industrialized Western countries. 4 Of course, budget deficits have risen with the recession, as lower business activity has led to lower taxes, and higher unemployment has led to requirements for higher social safety-net payments. But the budget deficit crisis goes beyond the conjuncture of the past four years, and in this respect the German view is correct. The industrialized West has had much lower rates of economic growth than those that prevailed more half a century ago when its generous social welfare systems were put in place. With lower growth there is simply no longer the wealth creation that is needed to fund these welfare systems.

The third Matryoshka doll is thus prolonged low economic growth in Europe. This deceleration is due in a large degree to the demographic slow-down resulting from lower birth rates and an aging population, but not only to these factors. The proof: some countries, most notably Germany and the Netherlands, have swum against the demographic tide and have offset the effects of an aging population by streamlining their economies and improving their competitiveness. It’s as though these Senior Citizens have watched their diets and gone to the gym regularly to lift weights, and have in so doing slowed the inevitable aging process. They look great compared to the rest of us.

The fourth Matryoshka doll – unevenly spread among Eurozone economies – is a crisis of competitiveness and productivity. While not a direct measure of competitiveness, business rankings are a useful insight into how countries perform. In the World Bank/IFC rankings of the ease of doing business, Germany ranks 19th and Finland 11th in terms of business friendliness, while Italy is at 87th place and Greece is number 100. 5 No wonder the Eurozone is being torn apart. Improving labor productivity and regaining competitiveness is a long, slow business – it involves labor market reform, overhauling the education system, paring down the civil service. But if there is one magic bullet in all of macro-economics, it is the magical, if dangerous, effect of devaluation. Like a strong dose of caffeine, devaluing the currency gives a jolt to the economy by bringing down real wages compared to those of trading partners, making a country more competitive overnight. 6 But devaluation is of course not possible within the Eurozone. Trying to regain competitiveness by squeezing nominal wages (what the IMF calls “Internal Adjustment’) is excruciatingly painful, leads to a long period of recession, and is generally accompanied by political unrest. This is what the Merkel-Sarkozy team is inflicting on Greece, Portugal, Ireland, and now Italy. It is doomed to fail.

The scariest doll of all

The fifth, and scariest, Matryoshka doll is the littlest one right at the heart of the set – the specter of a credit crisis. Here we are no longer in the realm of economics; we pass to psychology. A credit crisis occurs when individuals, banks and firms become afraid of extending credit to one-another. As everyone draws in their loans, firms no longer have lines of credit with which to purchase raw materials and individuals can no longer obtain loans for purchases. Unemployment skyrockets, and the economy grinds to a halt. 7 The United States narrowly averted a credit crisis after the collapse of the investment bank Lehman Brothers in September 2008, and it only did so by figuratively pouring limitless money into the economy to reassure lenders. Europe is now on the doorstep of a major credit crisis, this one not triggered by the collapse of an investment bank, 8 but by the absence of any agent able to backstop the countries that are having difficulty servicing their debt. Angela Merkel has strenuously resisted allowing the European Central Bank (ECB) to play an explicit role of “Lender of Last Resort’, which analysts and traders believe makes a European credit crunch more likely.

The Merkozy agreement of December 9 will not resolve the Eurozone problem. It requires countries to pass into law the famous Maastricht criteria, 9 and ensures EU-level scrutiny of national budgets before they are submitted to parliaments. It does indeed create a degree of discipline in public finance, but only deals with the problem of countries’ budget deficits and their financing through issuing debt – actions which have already occurred and led to the Euro mess in the first place. In essence, the agreement closes the stable door after the horse has bolted. It does not deal with the low growth problem and the danger of credit risk.

Worse: these poorly timed austerity measures at this juncture are likely to depress growth in today’s economic climate, and make the servicing of existing national debt more difficult. And despite the creation of the new €500 billion European Stability Mechanism (ESM) – which adds to the existing €440 billion European Financial Stability Facility (EFSF) – the ECB is still not officially allowed to expand its role to that of bailing out countries and banks that cannot pay their debts. Were the need to arise to bail out Italy, for example, these funds would not suffice.

More resolve is necessary to stem the Eurozone crisis. The German view of the cause of the crisis is flawed; and the misguided remedies agreed on November 9 in Brussels are a massive gamble on the future of Europe. Two further actions are urgently needed. First, a European-wide economic stimulus package must be put together – inevitably supported in the main by the German economy – to get the European economies going again and restore growth in Europe. And second, there has to be agreement that the ECB is allowed to play the role of European Lender of Last Resort.

Until these two actions have been implemented, we can expect many more Euro summits. We can expect austerity, we can expect continuing tensions within the Eurozone, and we can expect broadening dissatisfaction amongst the European population at large against the entire European project. It is not the moment for Europe’s politicians to be timid.